Going back to the origins of Algiers: an archaeological evaluation, Place des Martyrs

Work on the substructure of the Algiers metro and its subsidiary installations (stations, ventilation shafts, etc.) are being carried out within the limits of the Kasbah, listed as an Algerian National Heritage Site since 1973, and on the UNESCO World Heritage List since 1992. More than two thousand years of the history of Algiers are buried here.

This quarter covers in fact part of the urban area of Ikosim, an ancient Punic trading post. Little is known of the origins of this city: the foundation of the ancient Ikosim probably dates from the 3rd century BC. The city was an integral part of the Kingdom of Mauretania from the reign of Juba II (25 BC-23 AD), a prince brought up in Rome, and whose capital is Caesaria (Cherchel).  In the year 40 AD the control of Rome became complete after the assassination of Ptolemy, Juba II's son, on Caligula's orders. Ikosim, under the latin name of Icosium, then became a Roman municipium – a status enjoyed by autonomous cities in the Roman Empire. In 371-372, Mauretania revolted and followed Firmus, a rebel prince, desirous of installing an independent State: Caesaria and Icosium were captured. In the 7th century, on the birth of Islam, the Beni Mezrenna tribe settled here. In 1516, the corsair Arudj Barberousse, founded a republic in Algiers which resisted Charles the Fifth. Then the town developed considerably under the Ottomans from the 16th century onwards. From 1830, the colonial epoch also left its mark.

For archaeologists, it offers a unique opportunity to open a window onto the substructure of the Place des Martyrs. Well conserved, the archaeological levels go down more than 7 metres. The site reveals cellars of the colonial epoch, a commercial quarter of the Ottoman period (16th-19th centuries), important Early Christian remains and levels dating from Antiquity.

Aware of the consequences of this urban project on the archaeological remains, the Algerian authorities have put into effect an operation of preventive archaeology, without precedent in Algeria. It is assured by the Algerian Ministry of Culture in collaboration with the Ministry of Transports, in partnership with the French National Institute for Preventive Archaeological Research, under the aegis of the World Heritage Center of UNESCO.
L'Office national de gestion et d'exploitation des biens culturels protégés (ogebc) (The national office of  management and exploitation of protected cultural wealth) et l'Entreprise du métro d'Alger (ema) contribute their material aid.
This intervention is realised by a Franco-Algerian team of archaeologists who combine their competence and know-how and involves several institutions working together:
– Ministry of Culture of the Democratic and Popular Algerian Republic;
– French National Institute for Preventive Archaeological Research;
– National Centre of Archaeological Research;
– Department of Culture of the Wilaya province of Algeria;
– National office of the management and exploitation of protected cultural wealth.
The results of this evaluation will enable the possible effect of the metro station to be clarified, even restricted, in order to limit the destruction of remains.

The quarter of the Ottoman souks

In a first probe, south of the area concerned, the remains of the quarter of the souks dating from the Ottoman epoch have been revealed. Two paved roads served the stalls and workshops of the craftsmen. An ironmonger's workshop shows floors built of small bricks on vaults still in elevation, as well as facilities linked to metal-work, forges and furnaces.

In the sub-jacent levels, an early Christian basilica has been discovered. It is a building of a respectable size whose main nave is almost 10 m wide. The limits of the side-aisles have not been determined as the walls were outside the area of the evaluation.
The most recent floor, covering an earlier one, consists of a polychrome mosaic which could date from the 4th or 5th century AD. The peripheral part consists of a décor of black secant circles on a white ground with a central cross. The central decoration consists of indented circles, alternatively red and green, and of a series of square panels decorated with "Solomon knots". The remains of the base of a moulded pedestal in what could have been the apse as well as traces of the framing of panels of a chancel in the choir, have been found.
After the abandon of the religious building a cemetery was installed in the ruins of the building.
This ensemble covers a more ancient building dating from the Early Roman Empire, of which only the foundations remain.

To the north of the area concerned, another probe revealed a quarter of dwellings dating from the Ottoman epoch, recovered and transformed during the colonial period. It surmounts the walls of the Roman houses occupied until Late Antiquity.
These results are still provisional, as the deepest levels of the Place des Martyrs have not yet been excavated, leaving hopes of finding remains of the Punic epoch, or even proto or pre-historic remains. 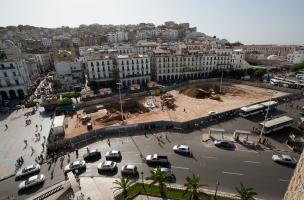 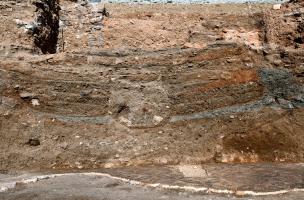 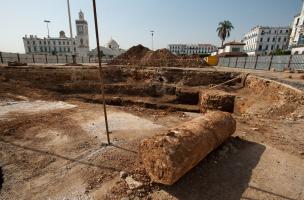 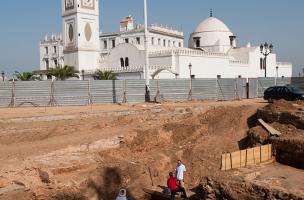 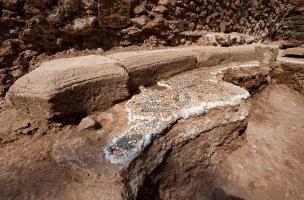 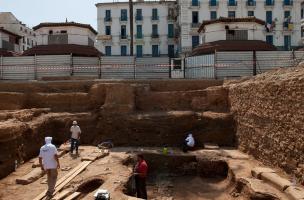 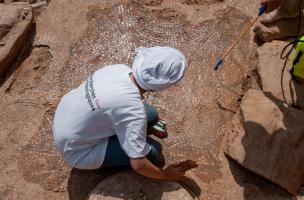 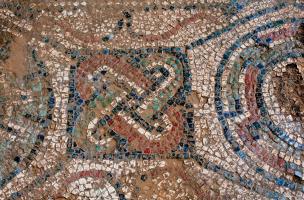 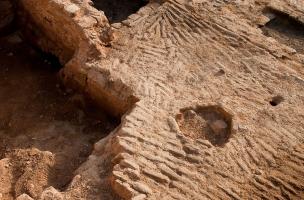 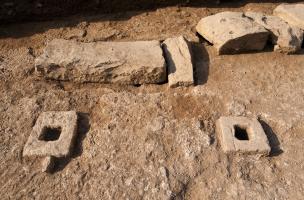 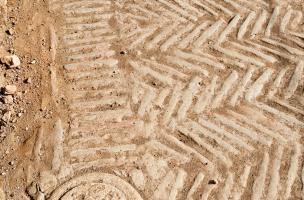 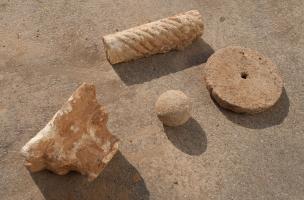 Following the ARIADNE project, ARIADNEplus has just been selected by the European Commission for 4 years.

The European Commission selected the NEARCH project, with 15 other European projects, to represent the “good practices” related to the management...

The Ethiopian authority of research and conservation of heritage (ARCCH), the French centre of Ethiopian studies (CFEE) and the French National...