Home
>
News : Inrap news
>
The A19 motorway. Bodies offered to the Gods.

The A19 motorway. Bodies offered to the Gods.

At the point where the Beauce and Gâtinais regions meet, a team of 60 Inrap archaeologists is currently excavating the site of the future A19 motorway between Artenay and Courtenay (Loiret). Curated by the Ministry of Culture (Drac région Centre), this research is financed by Arcour, the future motorway operator. Of the 1,300 hectares of land concerned, over 90% has already been explored. Among the one hundred or so sites identified, that of Neuville-aux-Bois has yielded numerous structures. Enclosures, ditches, insubstantial buildings and granaries have been excavated.

Chronicle of site
Les tombes celtiques en silo de Neuville-aux-Bois à Neuville-aux-Bois (Loiret)
Post date
24 August 2006
Last modified
10 February 2017
Most of these structures date from two periods of the Second Bronze Age (La Tène culture): one around 450 BC, the other at the end of the 2nd century and during the 1st century BC.
The agricultural nature of this Celtic site is confirmed by the presence of numerous silos, large underground storage pits, which were hermetically sealed to assure the conservation of harvested cereals.
At Neuville-aux-Bois, seven of the fifteen silos contain eight human corpses.

From relegation grave to "silo-offering”

Download the press release (August 24, 2006): The A19 motorway. Bodies offered to the Gods. (pdf, 126 KB)
The pits generally contain only one skeleton. One of the silos, however, has two, successively deposited individuals. These human deposits attest to the reuse of domestic structures as graves.
The term relegation grave, refers to the practice, recognized throughout Europe, whereby certain individuals are marginalised by being interred outside the sacred space of the cemetery.
However, the discovery of a woman wearing a rigid bronze necklace (torque) and two bracelets, a deposit of metal objects (bracelet, goblet), four carefully arranged horse legs, and a whole pig, all contradict this theory of rejection or exclusion.
The excavations at Varennes (Seine-et-Marne) and Vatry (Marne), have already led Inrap archaeologists to develop a new theory: that of "silo-offerings". The discoveries at Neuville-aux-Bois now support this theory. These would no longer be corpses rejected by the community, but rather an offering to the Gods: a chosen individual (often a woman), a symbolically and socially significant animal (here a horse) and metal objects. Whatever case, the silo-offerings explicitly link two worlds, the agricultural and the funerary. 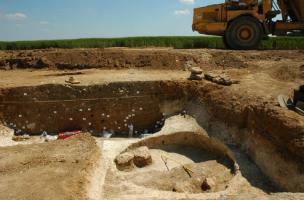 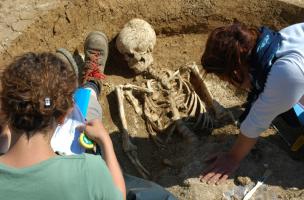 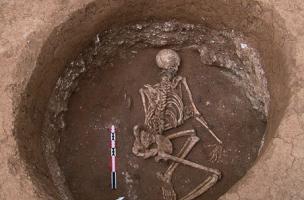