Since April 2017, an Inrap team has been excavating, under State (Drac, Normandy) curation, a quarry site at Alizay-Igoville (Eure) exploited by Cemex Granulats and Lafarge Granulats France. Located at the confluence of the Seine and Eure rivers, this wetland area was traversed by channels next to which humans settled during Prehistoric and Protohistoric periods. In this regularly flooded zone, the usually ephemeral remains of human and animal footprints were preserved under the sediments deposited by the Seine.

At the end of the 3rd millennium, the banks of the Seine were rationally managed

Covering 8 hectares, the size of this excavation is exceptional. The archaeologists have uncovered several human occupations dating from the Early Neolithic (early 5th millennium) to the very beginning of the Early Iron Age (around 800 BC).

The period between the end of the Neolithic and the beginning of the Iron Age yielded the most unexpected results. At around 2100-1900 BC, humans settled on a low hill surrounded by paleo-channels. The channels were modified by the construction of palisades, “docks”, bridges, fords, etc. The settlement consisted of two buildings surrounded by several combustion features, flint knapping areas, and grain processing zones. Beyond the inhabited area, the valley was used for animal grazing. The animal stalling and circulation areas are identifiable through characteristic chemical concentrations on the ground (phosphates). How humans occupied and used the spaces can be understood through a combination of archaeological evidence on the site: artifacts, pollen, entomological remains, soil geochemistry, etc. This research on the human occupations and paleo-environment of the site of Alizay relates to very current research questions concerning the management of resources.

This settlement was affected by various catastrophic events at the end of the 2nd millennium BC, during which a short climatic degradation occurred. Many fossilized animal and human footprints were discovered under and a thin layer of fluvial sand, attesting to a rapid movement of animals (pigs or boars, bovids, etc.) accompanied by humans and dogs.

The archaeologists currently favor the hypothesis of a sudden rise in the Seine River level, making it necessary for the Early Bronze Age settlers to move their animals to higher ground in the valley. The presence of “sling-bullets” in the process of manufacturing scattered across the trampled area indicates that the settlers retreated from the rising water in a hurry.

These very standardized, olive-shaped, weapon elements recall others discovered during the excavations carried out in 2011: two fords located farther to the west yielded several hundreds of sling-bullets, indicating conflicts between human groups. This hypothesis is confirmed by the discovery of numerous human remains in the same archaeological levels. Following these episodes, whose detailed chronology remains to be determined, this portion of the Seine valley was abandoned for nearly a millennium, until a new settlement was established between 900 and 800 BC. 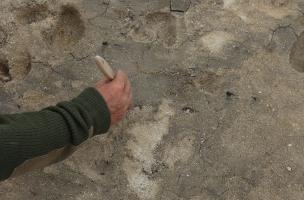 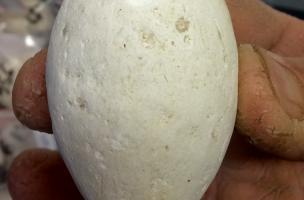 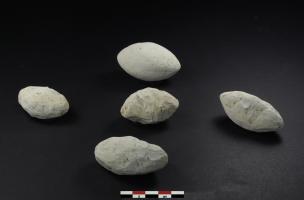 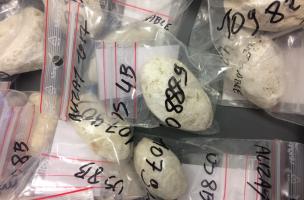 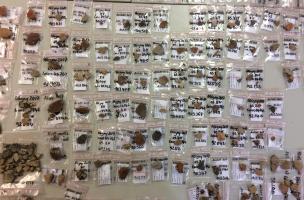 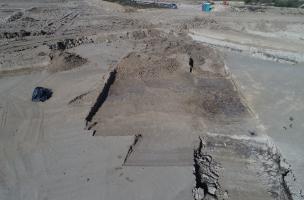 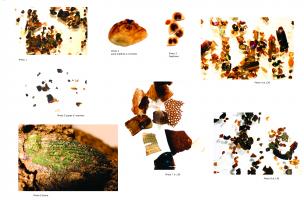 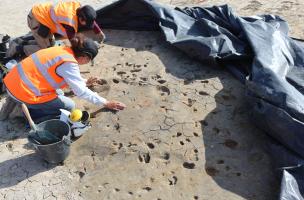