Home
>
News : Inrap news
>
The country residence of the bishops of Thérouanne

At Saint-Martin-d’Hardinghem, in advance of the construction of flood retention basins in the Aa river valley, Inrap excavated, in partnership with the Department of Pas-de-Calais, part of the country residence of the bishops of Thérouanne, dated to the High Middle Ages. The archaeologists uncovered 200 m² of decorated pavements, all of which are very well preserved, which is rare. The State (Drac Hauts-de-France) prescribed an operation to relocate this vast archaeological feature.

AN AGRICULTURAL AND RESIDENTIAL DOMAIN

The domain is situated in a valley bottom on the edge of the Aa river. The frequent flooding of the site due to the rising water table enabled the preservation of wood remains and metal tools. The construction and occupation have been dated from the 14th century to the first half of the 15th century based on a dendrochronological analysis and study of the ceramic artifacts. While written documents on this site are rare, the toponymy – La Cour Lévêque – provides some initial information. As large property owners, the clergymen maintained strict control over the medieval rural domain and the bishops of Thérouanne headed a large diocese before its dissolution in the mid-16th century. The site excavated at Saint-Martin-d’Hardinghem is a country residence, 14 km from the seat of the episcopal see. Very few of these residences have been excavated in France; some are still preserved above ground, while others are protected from development projects by their isolated locations. They are architecturally very similar to the secular aristocratic constructions.

This wall-enclosed domain is composed of an agricultural sector and a residential sector. The agricultural sector is organized around a central courtyard. It has a small dwelling attached to a large building of 360 m² whose internal partitions suggest a stable.

The aristocratic residence is surrounded by 13 m wide moats traversed by a wooden bridge. In addition to a kitchen and corridor-gallery, it contains a 144 m² ceremonial room with a monumental, semi-recessed fireplace. Its floor is covered with decorated paving tiles.

The paving of the gallery and the ceremonial room cover a total surface of 200 m², which is well-preserved other than a few gaps. The tiles are decorated with varied motifs typical of this period: lions, eagles, fish, fleur de lys, daisies, knights,  and heraldic figures.

Most often 10 x 10 squares, they are arranged in panels separated by monochrome bands. In the corridor, the decorative motifs are less varied and the tiles are cut into triangles or ovals composing geometric motifs. Some zones show wear and repairs that indicate the areas with the most circulation.

The future study of the tiles will include their origin, manufacturing methods, etc. This decorated tile pavement is a sign of luxury, as well as a major work of decorative art in medieval architecture. It is one of the rare discoveries of this type outside of a religious space. The preservation of this unique archaeological heritage is very important for scientific research and the transmission of knowledge to the public.

The State government organisms have decided to protect these pavements, which are threatened by the dyke construction project, by removing and restoring them before exhibiting them to the public. 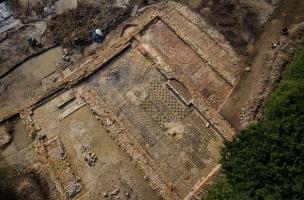 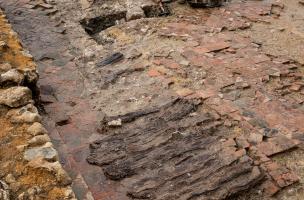 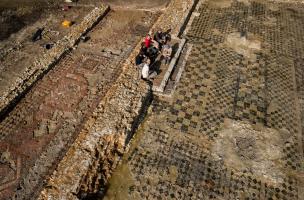 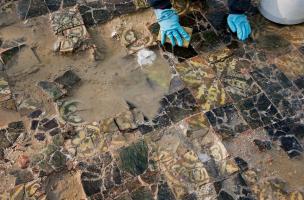 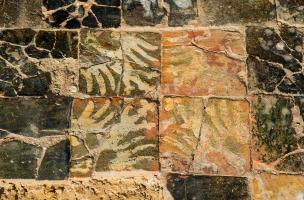 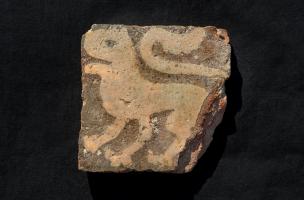 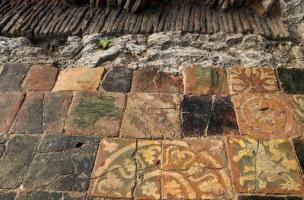 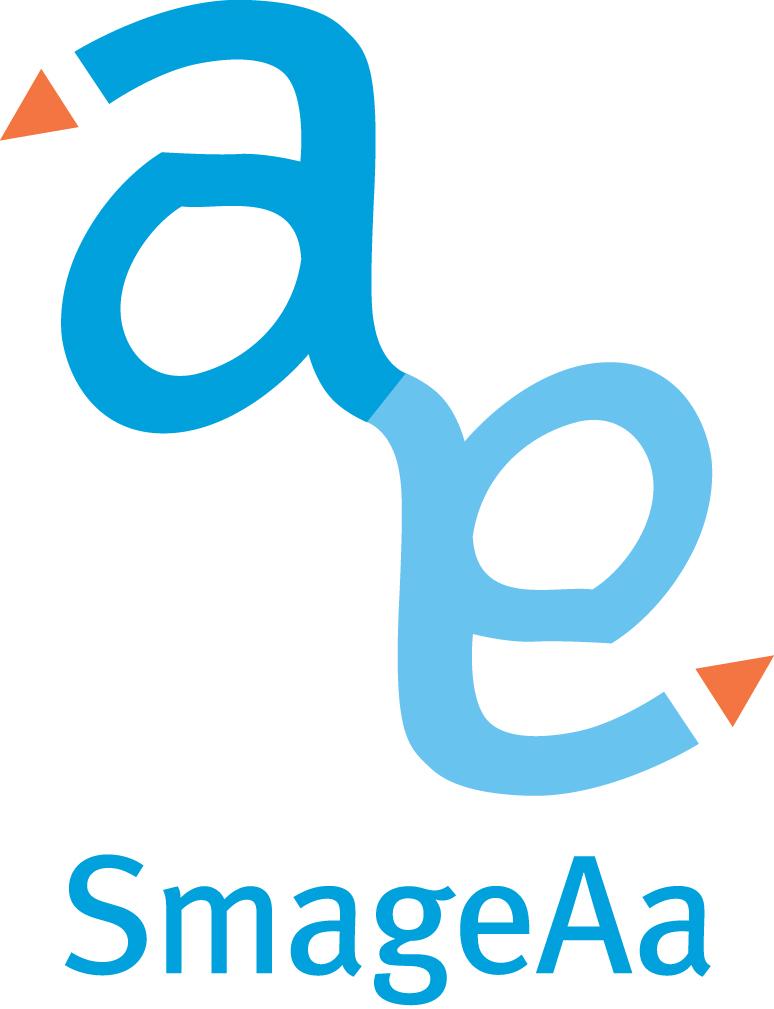