Researchers from Inrap and the Pacea UMR, Université de Bordeaux, have published in the PlosOne review, the first archaeological and biological anthropological evidence of this Muslim presence in France during the early Middle Ages.

During the early Middle Ages, the rapid Arab-Islamic conquest led to major political and cultural changes in the Mediterranean world. Although the medieval Muslim presence on the Iberian Peninsula is now well documented, based on archaeological and historical sources, until now its expansion in France has been documented only through textual sources dated to the 8th century, or rare archaeological data.

Today, researchers from Inrap and the Pacea UMR, Université de Bordeaux, have published in the PlosOne review, the first archaeological and biological anthropological evidence of this Muslim presence in France during the early Middle Ages.

In advance of the construction of an underground parking lot in the town of Nîmes, on the present-day avenue Jean-Jaurès, the excavations led by Inrap revealed an Antique residential quarter, along with about twenty graves. Among these, the body position of three male burials is distinct, being placed on their right-hand side and facing southeast. This body position, with the head oriented in the direction of Mecca, as well as their direct deposit into a pit, clearly correspond to Muslim burial customs. In two of the graves, the burial pit was dug with a lateral niche that corresponds to the traditional Muslim al-lahd burial type. 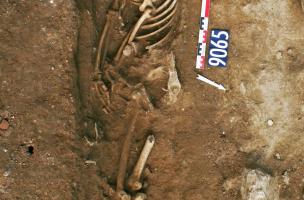 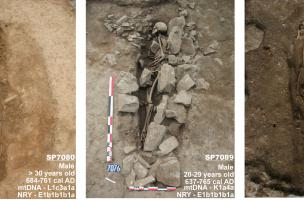 Several radiocarbon dates of the three individuals give an age between the 7th and 9th centuries AD. These archaeological data fit well with historical sources that document the Muslim presence during the first half of the 8th century. The Chronicle of Moissac would thus attest to the presence of Muslims in Nîmes in 720 AD. Given these first results, and to learn more about the identity of the individuals, a paleogenetic analysis was recently conducted. The results argue in favor of a North African ancestry for these three individuals, at least on the paternal side. All of these data suggest that the skeletons discovered in the graves in Nîmes belonged to Berber soldiers integrated in the Umayyad army during the Arab expansion in North Africa. This discovery not only contributes the first anthropological and genetic data concerning the Muslim occupation of the Visigothic territory of Septimania, but also highlights the complexity of the relationship between the two communities during this period.