Home
>
News : Inrap news
>
35 000 years ago, Aurignacians were the first modern humans to occupy the cave of Mas d’Azil

35 000 years ago, Aurignacians were the first modern humans to occupy the cave of Mas d’Azil

A team of archaeologists and geoarchaeologists from Inrap and the Traces Laboratory (CNRS – Université de Toulouse Jean Jaurès) have been working since 2011, under prescription of the State (Drac Midi-Pyrénées), in the cave-tunnel of Mas d’Azil, in the Ariège region of France.

This rescue and research operation is part of a vast project to better understand this site and improve its presentation to the public. The multiple rescue operations are linked to various tourist installations in the cave (visitor’s pathway and welcome center, etc.) and to renovating the departmental highway running through it to make it safer. This work is accompanied by a complete archaeological and geological study of the cave, consisting of a meticulous study focused on its prehistoric occupations during the last great glaciation (between 40,000 and 13,000 years ago). The cave also provides useful climatic information, attesting to alternating periods of hostile cold and more temperate phases, during which prehistoric humans ventured inside the cave.

A new scenario for the history of the cave

The researchers have thus revealed a new history of human presence at the foot of the Pyrenees. The unearthing of an Aurignacian occupation linked to the first arrival of modern humans in this part of Europe is a major discovery. The Prehistory of Mas d’Azil now begins with the arrival, 35,000 BC, of the first Upper Paleolithic populations (called the Aurignacians, and the artists of Chauvet Cave).

They were followed much later by Magdalenian people who ventured into the cave during a milder climatic period. In this immense cavern, they left numerous and famous portable art objects, as well as artistic depictions on the cave walls. At the end of the Pleistocene, when the climate became warmer, a new civilization emerged, the Azilian, which was named after this cave.

Extensively explored since 1860, the right bank of the Mas d’Azil Cave largely suffered from its early discovery. Until recently, it was thought that only a bit of spoil from the early excavations remained, but recent rescue archaeology operations have now revealed a long stratigraphy several meters deep. During the glacial periods of the Quaternary, the Arize River deposited sedimentary layers (pebbles, sands and silt) that nearly filled in the cave.

These previously unknown periods of flooding in the cave are very important for understanding the history of its formation, as well as of the evolution of the Pyrenean valleys. Most of the oldest layers, which were sealed by these river deposits, can be attributed to the Aurignacian period (35,000-33,000 BC). When the climate later became warmer, the Arize River regained its erosive power and re-cut through its own deposits, making the cave accessible to humans once again.

The later layers date to 14,700 BC and lie directly above the river deposits: the Magdalenian occupation thus followed this flooding and filling phase in the cave. Another important element has now been revealed at Mas d’Azil: it was previously thought that Aurignacians did not live deep in caves, but their occupations have now been found inside this cave. This is a major discovery. Modern prehistoric archaeology techniques now enable researchers to replace some of the old artefact collections, kept in museums, into their original context. The discovery of a complex stratigraphic sequence, with many Aurignacian artifacts at its base, contributes important new elements to our knowledge of Prehistory.

The study of this new stratigraphy, an understanding of its formation processes, and the extension of this archaeological and geoarchaeological study throughout the cave, are all very promising. This research sheds new light on the Aurignacian period in the French Central Pyrenees. The prehistoric human occupations in this vast valley bottom could have been very different from, or complementary to, those found in the “small” caves often perched high above the landscape, and which until now were almost the only ones known.

The Mas d’Azil Cave and Prehistory

Research began at this paleontological and prehistoric site as early as the 1840’s by Father Pouech when the genie imperial planned to construct the road traversing the cave. Félix Garrigou described its general stratigraphy in 1867. During these years, thousands of flint tools and hundreds of portable art objects were extracted from the cave. In 1901-1902, Henri Breuil defined the chronology of the Magdalenian culture based on the excavations at Mas d’Azil, and discovered the first remains of parietal art in the cavern (depictions of bison, horse, felines, fish, etc.).

From 1936 to 1958, Joseph Mandement discovered numerous galleries until then unknown. But it was Marthe and Saint-Just Péquart who, from 1935 to 1942, excavated deep in the cave and uncovered one of the rare “deep-cave dwellings”, along with some Magdalenian artistic masterpieces: spearthrowers, pierced batons, cut-out figures, etc. Since this date, only occasional research has been conducted in the cave. The right bank, where the decorated galleries are located, was since considered sterile. The Mas d’Azil Cave is the eponymous site of the last culture of the Upper Paleolithic before the start of a new era, the Azilian, defined by Edourd Piette in 1887-1889 based on his work in the vast site on the left bank of the cave.

This Epipaleolithic culture, meaning between the Upper Paleolithic and the Mesolithic, followed by the Neolithic, is characterized by perforated red deer harpoons; very short endscrapers and more or less geometric weapon armatures (Azilian points). Art is represented by painted or engraved pebbles. Unique in the world, Mas d’Azil is also open to the public. Visitors are invited to discover the galleries on the right bank of the Arize. Beginning in the middle of the cave, this underground system is a complex succession of chambers and galleries that are deep and obscure. The entire section that is open to the public was renovated in 2013. 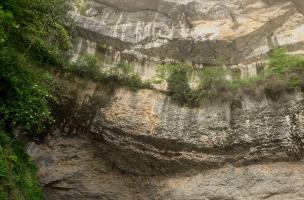 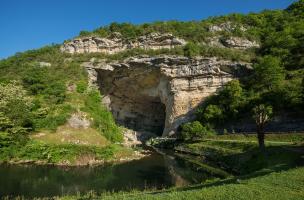 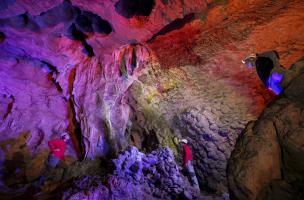 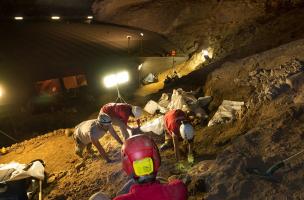 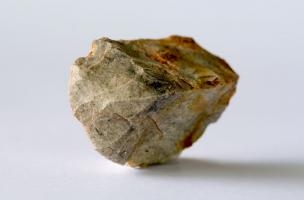