Home
>
News : Inrap news
>
A bird among the earliest art

A bird among the earliest art

Iluminada Ortega and Laurence Bourguignon of Inrap, along with their Spanish colleagues, have announced in the Journal of Archaeological Science Reports, the discovery of an Aurignacian art object, 35,000 – 31,000 years old. This object, depicting a bird, contributes to our knowledge of the origins of figurative art.

In advance of the construction of the eastern Bergerac bypass route (Dordogne), the preventive excavation realized by Inrap at the open-air doline site of Cantalouette revealed prehistoric occupations from the Middle Paleolithic and Neolithic periods. Iluminada Ortega and Laurence Bourguignon of Inrap, along with their Spanish colleagues, have announced in the Journal of Archaeological Science Reports, the discovery of an Aurignacian art object, 35,000 – 31,000 years old. This object, depicting a bird, contributes to our knowledge of the origins of figurative art

A 35,000 years-old passerine, wryneck or perdix 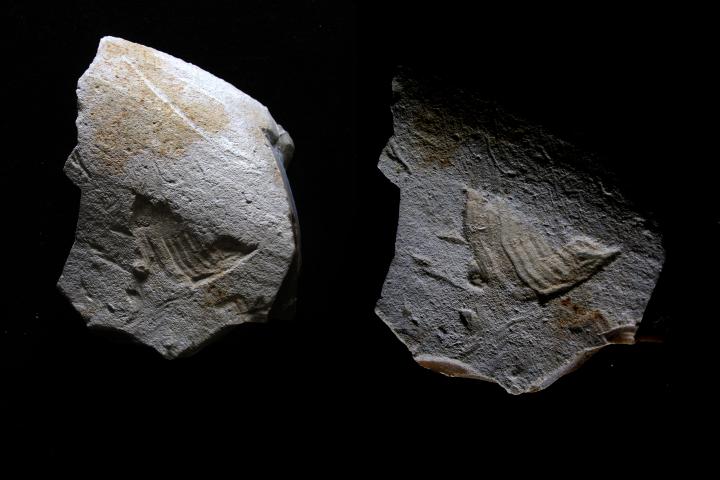 This depiction is very distinct and probably unique in the Aurignacian period, during which Modern Humans arrived in western Europe. It is exceptional in its degree of naturalism, the nature of its support—the cortex (limestone coating) of a flint flake—and the engraving technique used. This “sunk relief” technique was identified through microscopic and 3D analyses realized at Cenieh (Burgos, Spain).

Using a stone tool, an irregular surface was carved into the cortex of the flint flake. The impression of relief was created by making one side lower than the other. The feathers and details of the head—a short and pointed beak, a small eye, and a possible eyebrow—were then engraved. The chest is represented by a nearly straight line. The wings appear to be entirely spread and are represented from a planar perspective with parallel lines depicting the feathers. A small projecting line represents the legs or tail. This sunk relief technique was rarely used in Paleolithic art.

This figure could represent one of three bird families present in France 35,000 years ago: passerine, wryneck or phasianidae (perdix or quail). Its posture suggests the bird is drinking, courting or ready to take off. The artist skillfully captured a very precise instant typical of this animal’s behavior

An ephemeral art with no canons

This engraving is distinct in the rarity of the animal depicted and the use of innovative techniques. They suggest an absence of rigid artistic traditions and techniques during the Aurignacian. This absence of canons is in fact characteristic of Aurignacian art, despite certain convergences, such as the depiction of dangerous animals in the Swabian Jura, Dordogne, Adèche and northern Italy.

At the doline site of Cantalouette II, the artist was thus free to “test” other manners of representing volumes and outlines. The artistic liberty of this artist can be correlated with that of the Aurignacian flint knappers in the Bergeracois region, who surpassed their technical skills by producing unusually large blades. The object itself, discarded in a flint knapping workshop, suggests the existence of an ephemeral form of artistic expression, a behavior previously unknown in the Aurignacian, and which raises questions about the function of the earliest figurative art in Europe.

This bird is very unusual for the Aurignacian period, during which the first artistic manifestations in Europe appear. The piece itself is fundamentally different from other contemporary artistic expressions, such as at the Chauvet-Pont d’Arc Cave, for example, since it was not meant to last. Aurignacian artistic and symbolic
manifestations were therefore not exclusively linked to social networks or beliefs, but were also creative, ephemeral, or even playful, expressions.