Excavation of a prehistoric Solutrean campsite in Boulazac

Since November 2011, a team of Inrap archaeologists has been excavating a large Solutrean site in Boulazac (Dordogne), near Périgueux. This work, which is curated by the State (Drac, Aquitaine), is taking place in advance of the construction of a waste management and recovery center by the Sita society, a subsidiary of Suez Environment.

Across more than 1000 m², archaeological diagnostic operations conducted in October 2010 revealed the presence of Paleolithic artefacts buried more than 2 meters deep. Today, the archaeologists are excavating a campsite that was inhabited by prehistoric hunters at the end of the Solutrean period, more than 20,000 years ago, during the last glacial maximum.

Download the press release (doc) May 24, 2012: Excavation of a prehistoric Solutrean campsite in Boulazac (doc, 599 KB)

The large size of the site and its excellent preservation – like that of the flint artefacts – are remarkable for an open-air site. In the campsite, on the southern bank of the Isle River, the archaeologists have uncovered domestic structures and intact fireplaces, along with specialized activity zones in which diverse tools were made and used. Though all of the bone remains were destroyed by the acidity of the soil, it appears that herbivore carcasses were butchered and processed at the site as well, in particular, those of horse and reindeer that were hunted in the Isle Valley.

Several thousands of flaked flint objects have been recovered. The archaeologists found very elaborate workshops where flint tools were made and used, including "Laurel Leaf” points, "leaf-shaped” tools, shouldered points and unifacial points typical of the Solutrean culture.

As at other sites from the end of the Solutrean period, the quality of some of the bifacial tools, especially the Laurel-Leaf points, shows that the flint knappers of this culture of the Upper Paleolithic had acquired a level of skill unequaled throughout prehistory. These very thin, lozenge-shaped tools were made with extreme care and are remarkable for their esthetic quality, symmetry and cutting capacity. Numerous roughouts and fragments of them were found at the site, resulting from flaking accidents or use, while most of the whole ones were probably exported to other sites.

The Solutrean artisans had access to many high quality raw materials on the alluvial terraces of the Isle River. Nodules of Senonian flint, quartzite and dolerite pebbles, and schist plaques were thus collected and worked to make tools and construct fireplaces. The study of the stone tool industry also revealed a non-local origin for some of the stones. Many tools were thus imported from the Bergerac region, nearly 50 km away, or from the Fumel area, on the right bank of the Lot River, nearly 70 km away.

The Boulazac campsite in its broader context

The stone artefacts at Boulazac thus reveal links to other Solutrean campsites. At the nearby cave of Combe Saunière, archaeologists have found evidence for the circulation and repair of dozens of shouldered points used for hunting, while hundreds Laurel Leaf points were produced at the open-air site of Cantalouette 2, near Bergerac, before being exported elsewhere.

The Boulazac site will be studied by an interdisciplinary team of French and international specialists. Analyses of the geomorphology and stratigraphy of the site, the technology of the stone artifacts and the micro-morphology of fireplaces, along with dates obtained by thermoluminescence and Carbon 14, will lead to a better understanding of this prehistoric campsite and the Solutrean populations who lived there. 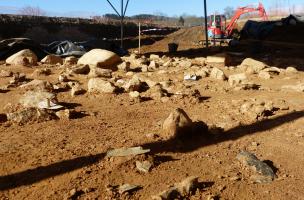 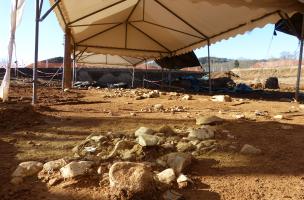 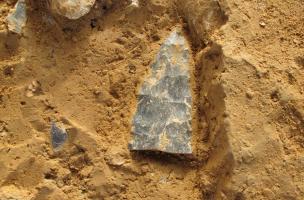 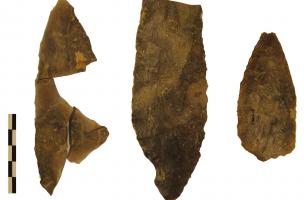 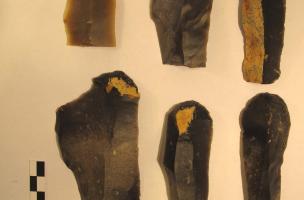