Men and horses: an unknown funerary practice in Roman Gaul

A team from the Institut National d'archéologie preventive (Inrap) has discovered a mortuary practice hitherto unknown in Roman Gaul. The archaeologists are working in an area of 200m2 intended for the construction of a private house at Evreux (Eure).

The excavation is curated by the Upper Normandy Regional Archaeology Service and funded by the National Fund for Preventive Archaeology. 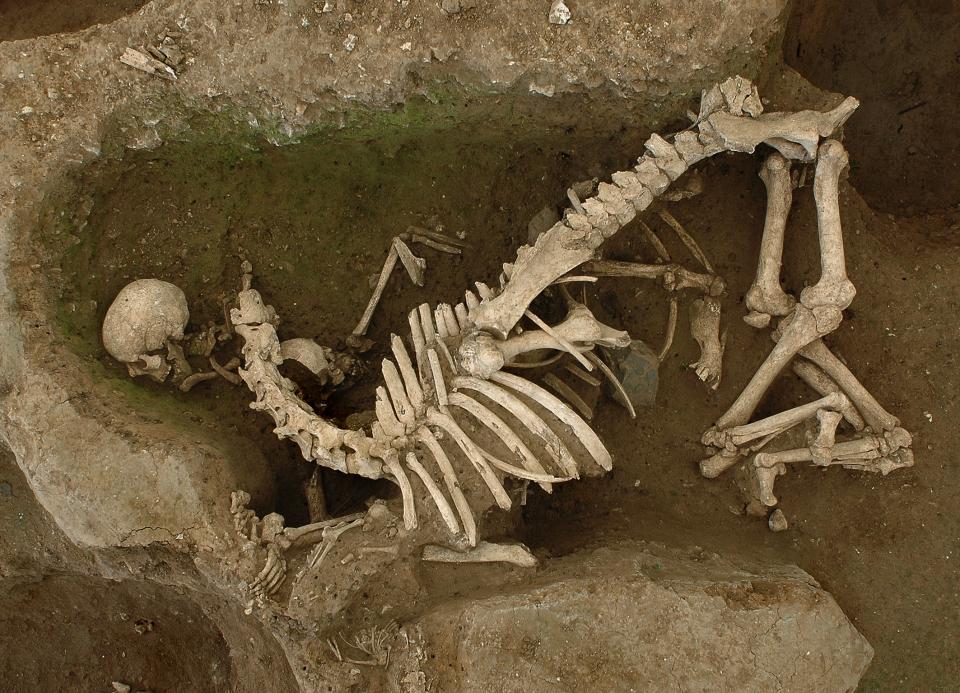 The earliest traces of human occupation of the town of Evreux seem to date from the third quarter of the 1st century BC. Its Roman name was Mediolanum Aulercorum, and it was the main town of the Aulerci Eburovices. It became important during the Augustan period and in the 1st century of our era it was equipped with a theatre, baths, and villas with painted walls, etc.

The antique cemetery is on a hill-side, outside the town, thus respecting the Law of the Twelve Tables then in force, along the road linking Evreux and Chartres. Already known during the 19th century because of some accidental discoveries, the site seems to have been used from the 1st–4th century AD. Evaluations and excavations carried out from 2002 onwards have clarified the typo-chronological evolution of the necropolis.

During the 1st century secondary cremation graves were predominant, even though some perinatal and adult inhumations have been found. From the second century AD onwards burial became the exclusive funerary practice.

Up to now, about forty inhumation graves have been excavated. Two of them can be dated from the 3rd century by association with a ceramic vase characteristic of this period. Other subjects have been radiocarbon dated (14 C). This part of the cemetery contains mainly adults, new-born babies and a few children under 10 years of age. The graves are very concentrated, and for the most part, are grouped together without any spatial organisation. The deceased were buried with their heads towards the North, the South, the East or the West.

Many adults were buried in an unusual position: several of them face downwards, one of them with an upper member twisted (right elbow placed behind the left shoulder), another buried with his lower members very bent, etc.

The second exceptional element is the fact that large pieces of horses were placed in most of the graves. Most of the time they were skulls or parts of vertebrae. However, one grave contained three horses, almost complete, buried simultaneously, one above the other. The most unusual deposit is that of an adult whose head is clasped by two horse skulls. The horse bones were placed in direct contact with the deceased, or in the pit fills.

Was it the result of a war, of an epidemic, or were they food offerings? These three hypotheses should be discarded: there is no trace of violence on the bones, they were not multiple graves linked with a catastrophe, and lastly horsemeat wasn't eaten in Roman times.

This deliberate act – the placing of sections of horses in Gallo-Roman graves – seems to be unique in France. Should one envisage the presence of a distinct people, through its origin, its religion, or its craft? Was it a survival of the worship of the Gallic goddess Epona? The continuation of the excavation and subsequent research may provide some answers. 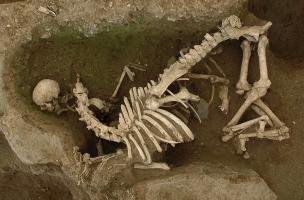 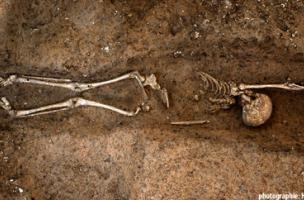 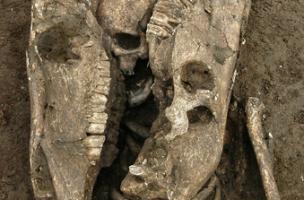 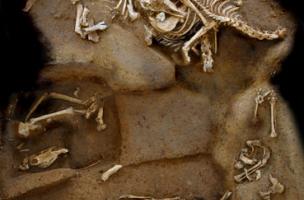