Mosaics have been found in the ancient residential quarter of Nimes by a team from the Inrap. The excavation precedes the construction of an underground car-park by the town of Nîmes and is curated by the Regional Archaeology Service.

About 120 BC, well before Caesar's conquest, this part of Transalpine Gaul was annexed by Rome. Situated on the Via Domitia, the town developed within Gallia Narbonensis. Embellishments continued right through the Early Roman Empire: the Augusteum, the Forum, the Maison Carrée, a new enclosure 6 kms. long, an aqueduct receiving water crossing the Pont du Gard and an amphitheatre (the Arènes) became part of the urban landscape.

A residential quarter in Nemausus

Download the presse release (June 26, 2007): Mythological pavements in Nîmes (pdf, 40 KB)
In the field, the remains, sealed by medieval agricultural soil and the thick made ground under the 18th century avenue are in a good state of conservation. The first phase of the excavations revealed the impressive remains of a residential quarter.

Excavations in the ancient quarter are continuing. In two neighbouring rooms of a dwelling, large mosaics with figures have just been found.
One of them is a 35 m2 figured pavement bordered with geometric bands (bands of staggered rectangles, chequered pattern) and a frieze showing foliage rising from a kantharos. The central rectangular part is made up of a series of medallions arranged in a complex fashion each one with a personage. It illustrates the Battle of the Gods against the Giants (gigantomachy). Sixteen oval medallions all decorated with a bird have an important place in the mosaic. Four quatrefoil medallions are placed in the corners of the carpet, each one decorated with the figure of a bacchante, full length, carrying a thyrsus, leaf crown and tambourine. A fifth medallion constitutes the central figure of the mosaic. It is decorated with a Bacchus crowned with leaves vanquishing the giant Eurytos, on his knees and naked.

Around this central element there are 4 more medallions, square-shaped with concave sides each one decorated with a bust whose headdress shows leaves, fruits and flowers suggesting a representation of the four seasons. Lastly, four semi-circular medallions finish the composition. Two of them are decorated with heads of divinities (Pan and Silenus) and two others with theatre masques. This mosaic is of high quality (coloured set of vitreous paste and stones, in shaded tones).

Wall paintings have also been found in this room. They have survived in situ up a height of about 40 centimetres and represent columns to which garlands of leaves, with ribbons, are attached.

The second mosaic is larger (almost 50m2). There is a series of bands with geometric motifs forming the frame of a central emblema showing the myth of Achilles on the Ile of Skyros, hidden in the gynæceum of Lycomedes and discovered by Ulysses.

Even though it is less well preserved, three personages can be distinguished in the foreground, two of which are women. In the background, there is a wall with two windows and half-length personages. Several weapons are shown, lance, helmet, shield. They were placed by Ulysses among his presents to the princesses of the court. Hidden among them, Achilles, at the sound of a trumpet, seized the shield and betrayed his presence. There again, the mosaic shows a wide palette with bright coloured glass mosaic (red, orange, minium, blue and green) as well as glass tesserae probably decorated with gold leaf. 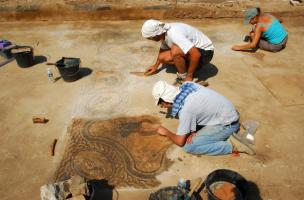 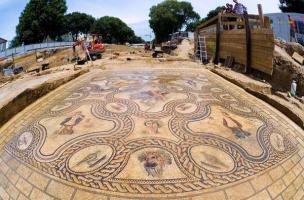 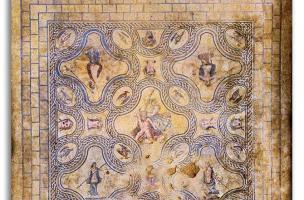 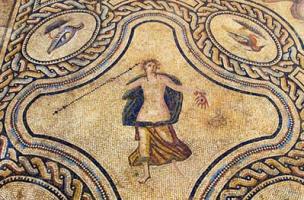 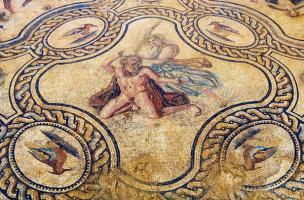 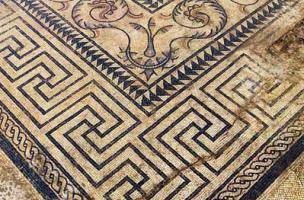