The archaeological excavation of the suburb of Arroux, north of Autun, curated by the State (DRAC Bourgogne) in the context of a social housing project, has revealed an Antique quarter composed of craft workshops and fine residences.

The archaeologists discovered the workshop of the coroplath (figurine maker) Pistillus: a pottery kiln, molds, complete figurines and failed ones, signed "Pistillus”, confirm the presence of his workshop at Autun. His works, though popular, are distinguished by carefully made statuettes and varied themes: Patron Goddesses, Goddess of Abundance, Venuses and animals, as well as tender representations of Roman intimacy. During the final weeks of the operation, mostly devoted to the study of a set of artefacts dating to the Augustinian period (early 1st century AD), a large monetary deposit was excavated.

Download the press release (December 3, 2010): Numismatic discoveries at Autun (pdf, 40 Ko)
The monetary deposit was buried in a pit sealed with tiles. It weighs 38 kg and contains more than 100,000 Roman coins from the end of the 3rd century AD. These coins are all small bronze pieces weighing less than 0.4 g. They are unofficial coins, like many that circulated during the very troubled period of the second half of the 3rd century, and perhaps into the 4th century.

​Serious crises struck the Empire during this time: unceasing wars between pretenders to the throne, epidemics, the financial and political burdens of the army, pressure at the borders, economic crisis, etc. The Roman State was no longer capable of fully ensuring the long-term control of the monetary system. Small bronze mintings of little value, which we could qualify as "necessity coins”, thus appeared. Though produced by private citizens, they were more or less tolerated by the State. They were poor imitations of the official productions and the effigies are difficult to identify. The coins discovered at Autun resemble typical 3rd century ones, such as those of Tetricus. Due to the high copper content of the deposit, the wicker basket in which they were stored is partially preserved.

Though this ensemble was somewhat valuable, it does not seem to have been a hidden treasure, but rather a deposit of debased coins destined to be recast. The pit is in fact located within one of the metallurgy workshops revealed at the site. In effect, to reestablish a healthy monetary economy, some emperors launched reforms and attempted to replace the ancient coins that had no value other than that of their metal. The monetary deposit of Autun is perhaps linked to the reforms of Diocletian under the Tetrarchy (late 3rd century-early 4th century).
A second deposit seems to have been situated not far from the first one since around 2,000 coins were recovered in the location of a wall of this same workshop. The dismantling of this wall, during the 4th or 5th century, is likely to be partially responsible for its destruction.

These numismatic artifacts will contribute to our understanding of unofficial mints and the phenomena of debasement and recasting of coins during the Empire.
These coins join the around 300 other Roman coins—most in bronze—discovered elsewhere on the site. Whether common or rare, these coins, like the other objects and remains, yield useful information only when they are discovered and studied in their archaeological context. 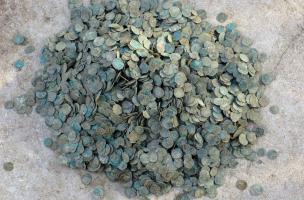 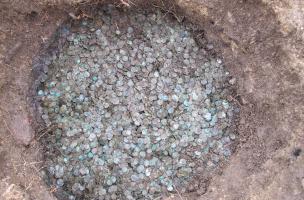 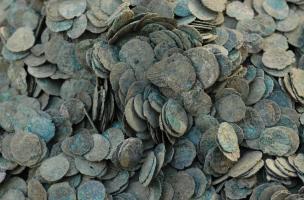 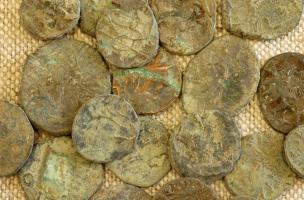