Home
>
News : Inrap news
>
On the trail of the first human settlements in Europe at Etricourt-Manancourt

Since the month of April, a team of Inrap archaeologists have been excavating several Paleolithic occupations in Etricourt-Manancourt, the oldest of which dates to 300,000 years ago. This work is curated by the State (Drac Picardie).

This research is part of the work being conducted in advance of the construction of the Seine-Nord Europe canal by Voies Navigables de France (VNF). In the location of the future retention basin of the canal, a diagnostic operation realized by Inrap in 2010 over 17 hectares revealed a Paleolithic level. In 2012, an excavation over a surface of 3200 m2 was conducted over 4 months.

Download the press release (July 6, 2012): On the trail of the first human settlements in Europe at Etricourt-Manancourt (pdf, 32 KB)

The open-air site of Etricourt-Manancourt contains at least five prehistoric levels, extending over the period of 300,000 to 80,000 years ago. The most recent level, dated to 80,000 years ago, corresponds to an occupation by Neandertals during the late phase Middle Paleolithic period (from 130,000 to 40,000 years ago). Around twenty sites from this period are already known in northern France.

The next two levels are also attributed to Neandertals and belong to the early phase of the Middle Paleolithic, during an interglacial period known as the Saalian, extending from 190,000 to 240,000 years ago. Discoveries of sites from this period are rare and in northern France only the excavations of Therdonne in 1999 (near Beauvais) and Biache-Saint-Vaast in 1976 (Pas-de-Calais) have revealed contemporary sites that are as well preserved.

The oldest level, which is currently being excavated, is exceptional. It is dated to at least 300,000 years ago and is attributed to the Acheulean culture of the Lower Paleolithic period. The flaked flint artifacts found in this level were made by either the last Homo Heidelbergensis occupants, or by the first Neandertals.
The site of Etricourt-Manancourt contributes important information on the first European settlements. 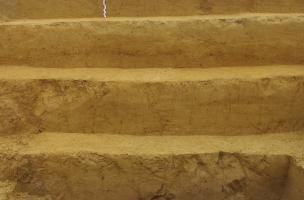 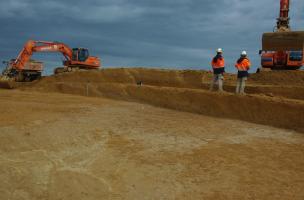 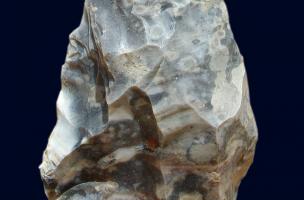 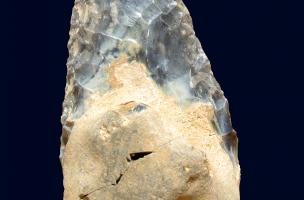 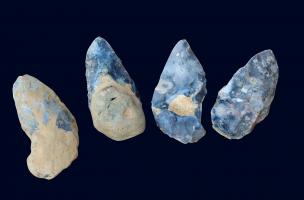 300,000 years of history, seven meters of stratigraphy and thousands of flint artifacts

The excavation, which now descends seven meters in depth, has revealed three main climatic cycles with successive glacial and interglacial periods (Holsteinian, Saalian and Weichselian). The oldest and richest archaeological level of the site is contained within well-preserved humus-bearing sediments dated to 300,000 years ago. This level has thus far yielded several hundreds of flaked flint artifacts, including bifaces, the most emblematic tool type of this period. Numerous bifaces were imported by hominids to the site and then discarded in place, probably after being used. Their probable use as knives in butchery activities is expected to be confirmed by an analysis of their use traces. Organic remains (bone and wood) were unfortunately not preserved due to the acidity of the sediments. The spatial distribution of the remains and analyses of the stone artifacts will nonetheless contribute to our understanding of the activities and lifestyle of these first Europeans.

140 years of Acheulean in the Somme Valley

In 1872, Gabriel de Mortillet created the term "Acheulean” to designate the oldest stone tool industries then known, discovered at Saint-Acheul, a suburb of Amiens. The Somme Valley is one of the landmarks of prehistoric research, having been explored in the mid-19th century by emblematic figures such as Jacques Boucher de Crèvecoeur de Perthes, Gabriel de Mortillet and Victor Commont.
One hundred and forty years after the creation of the Acheulean culture, the Somme Valley, at Etricourt-Manancourt, has again yielded rare and precious evidence of the earliest peopling of Europe.