Home
>
News : Inrap news
>
The archaeology of daily life during the Great War: a German camp

The archaeology of daily life during the Great War: a German camp

A team of Inrap archaeologists is currently excavating artefacts from the First World War near Reims. Covering 4.5 hectares, this Inrap excavation, curated by the State (Drac Champagne-Ardenne), is taking place in advance of the construction of an activity zone for the Chamber of Commerce and Industry of Reims-Epernay.

Originally programmed for the study of Iron Age and Gallo-Roman remains, this research has also led to the discovery of a German army camp behind the front. Though few second line camps have been excavated, they provide evidence for daily life activities that were different than those on the front lines.

A second line camp in the German zone

This camp is located in a territory that was occupied by the Germans throughout the war, near an ancient railway hub that directed provisions and weapons to the front line. On the front line, each squad protected a portion of the trench. They were replaced approximately every three weeks and the soldiers rested in a camp like the one at Isles-sur-Suippe before returning to the front. Among them the Eighth Company of Pioneer Reserves is mentioned on an iron oven plaque. In the second line camps, the usual military activities took place: new recruit training, physical and military training, and building and fortifying the back lines.

In the field, the archaeologists are excavating a rich artefact collection related to the daily lives of the soldiers: wine bottles, soda water bottles, pharmaceutical bottles, glass phials, canned food containers, Bavarian and French dishes, etc. Many animal bones with cutmarks on them reflect the diet of the soldiers. The approximately fifteen pits excavated have also yielded the remains of military equipment: gas mask filters, helmet points, shoe soles, etc.

An ashtray made from a shell casing is evidence for “craftsmanship in the trenches”. Many objects related to personal hygiene were also found, which is to be expected since soldiers on the second line had time for such activities.
One of the pits contained unusual objects including, under a horse, a stuffed bear skull and claws, which was probably a hunting trophy, along with a small statue of a Great Dane and fine dinnerware. These objects perhaps belonged to an officer. 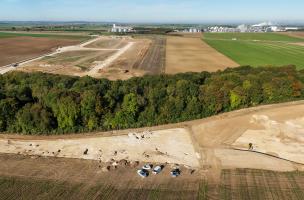 Aerial view of the excavated area 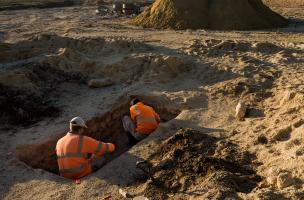 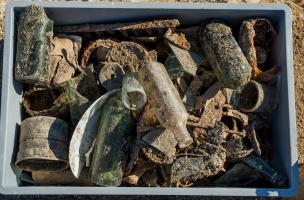 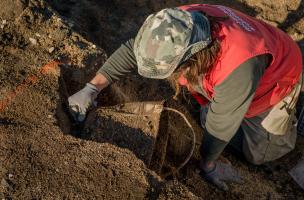 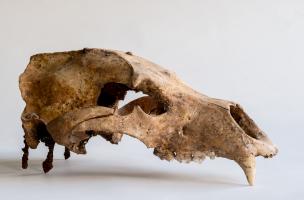 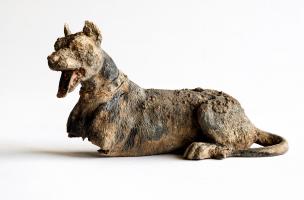 Four 13 m long cabins are grouped together in one part of the site. The excavation of the first one revealed that it has a wooden floor and stairway. The archaeologists think these may have been barracks for the soldiers, able to house around 24 men or ammunition magazines. Four first generation French bullet cartridges dated to 1916 were found in this building. These munitions served to defend the second lines, the more recent and effective weapons being reserved for the front lines.
Developer : Chamber of Commerce and Industry of Reims Epernay
Curation : Regional Archaeology Service (Drac Champagne-Ardenne)
Site Director : Anne-Charlotte Baudry, Inrap
Introduction
Contact(s) :