Home
>
News : Inrap news
>
Astrology and antiquity: the disc of Chevroches at the Musée archéologique of Dijon

Astrology and antiquity: the disc of Chevroches at the Musée archéologique of Dijon

An object unique of its kind has been discovered in the Gallo-Roman town of Chevroches (Nièvre) during preventive excavations carried out by a team from the Institut national de recherches archéologiques preventives (Inrap). The Musée archéologique of Dijon in collaboration with Inrap is displaying this discovery until 28 January 2007.

Chronicle of site
Le disque astrologique de l'ancien bourg gallo-romain de Chevroches à Chevroches (Nièvre)
Post date
06 December 2006
Last modified
10 February 2017
The hemispherical disc is made of bronze plate with a diameter of 6.5 cms. Conservation work has revealed its astrological and astronomical function.
The disc is divided into twelve equal compartments in which are inscribed, in Greek letters, three successive words: the external line corresponds to the twelve Egyptian months, the median line to the signs of the zodiac and the inner line to the twelve Roman months.
Post-excavation analysis has enabled this disc to be dated to the late 3rd century AD.

An astrological instrument that raises questions

Download the press release (December 6, 2006): Astrology and antiquity: the disc of Chevroches at the Musée archéologique of Dijon (pdf, 6 MB)
A round table of about thirty experts from different disciplines (astronomy, astrology, papyrology, archaeology, historiography, classics …) was organised to compare and contrast their interpretations of this instrument. Although other astrological instruments from antiquity have come down to us, the Chevroches disc is a unique example, in the Roman world, of a calculating instrument which enables the determination of a celestial map.
Its display in a temporary exhibition allows a wider public to discover both the object and the context of its discovery

It shows the Gallo-Roman town of Chevroches and its development. The site of this major discovery was very rich as the Roman occupation lasted from the second quarter of the 1st century until the 5th century AD. Metal-working was an important activity during the 4th century (iron and bronze) and was organised in large workshops installed in small zones delimited by roads. In addition to a monumental bowl and a square-shaped building, many noteworthy elements of furniture made of bronze, iron or lead have been discovered: tools, domestic elements, harnesses, bars and scrap from the forge, elements of finery and even a decorative element of an openwork sheath.
A large place is devoted to hoards and deposits of metal objects, which constituted the metal reserve for recasting and was used for minting counterfeit coins or for repairs. It was in one of these deposits, dating from the 4th century, that an instrument caught the attention of archaeologists and revealed itself to be an exceptional piece from an astrological and astronomical point of view. 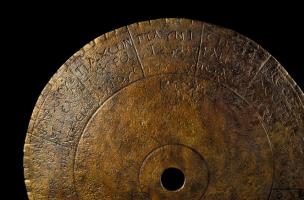 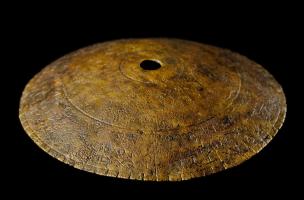 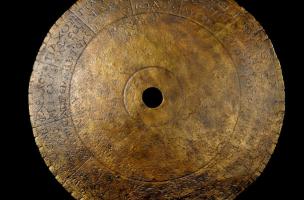