On April 23, 1983, 120 personalities of the Contemporary Art World took part in a banquet orchestrated by the artist Daniel Spoerri in the park of the domain of Montcel, at Jouy-en-Josas (Yvelines), where, a year later, the Cartier Foundation was to be installed.

Chronicle of site
Domaine du Montcel à Jouy-en-Josas (Yvelines)
Post date
20 May 2010
Last modified
20 January 2017
In the middle of this feast of entrails and offal, the banquet was buried in a 60 metre long trench dug in the lawn. Tables, table-cloths, crockery, cutlery, meal remains, graffiti, odd dedicatory notes, objets d’art, photos, were all buried under square cubes of earth, during a collective ceremony organised by the artist.
Download the press release (May 20, 2010): Excavation of Daniel Spoerri’s Déjeuner sous l’herbe at Jouy-en-Josas (pdf, 40 KB)
This performance entitled L’enterrement du tableau-piège (The Burial of a Trick-Picture) marked Daniel Spoerri’s renunciation of the series of tableaux-pièges, many of which are displayed in museums. In the park, there will remain a discreet work entitled "Le déjeuner sous l’herbe" in ironical reference to Manet’s painting Le déjeunersurl’herbe, itself inspired by Titian’s Concert champêtre.
Le déjeunersousl’herbe is one of the permanent works (Arman’sLong Term Parking, Hommage à Eiffel by César, Six ifs by Raymond Hains...), which have remained in the Park of Montcel after the moving of the Cartier Foundation to Boulevard Raspail, Paris, in 1994.

Buried since 1983, Daniel Spoerri’s banquet has decomposed, to the point of being little more than a memory. To study the remains, twenty-seven years later, the first archaeological dig in the history of contemporary art has been organised under the aegis of the artist by theSociété du déterrement du tableau-piège, the University of Paris I, the EHESS (Ecole de hautesétudes en sciences sociales), the l’Institut de rechercheinterdisciplinairesur les enjeuxsociaux of the CNRS, in association with Inrap.
This multidisciplinary event will take place from May 31 to June 10, 2010 and will bring together, in the presence of Daniel Spoerri, archaeologists, an anthropologist an art historian, a film director…

If some hope to push back the classical definitions of science and creation, for others it is a true anthropological investigation ; the excavation of the Déjeunersousl’herbe joins thearchaeology of contemporary rubbish, the Anglo-American Garbage Archaeology, which has no equivalent in Europe.  It will bring together all archaeological specialities: palynology, dendrology, sedimentology, carbon 14 dating, chemical analyses, etc.
This dig invites opens up the redefinition of chronological limits of the discipline and an interrogation of the archaeology of the present time.

Artist, performer, sculptor and founder, in 1960, of the movement of Nouveau Réalisme, with Yves Klein, Martial Raysse and Jean Tinguely, Daniel Spoerri (born in 1930) here continues to question what constitutes a work of art and creation, while offering to scientific study an extraordinary field of experimental research.

Entitled Le déterrement du tableau-piège, the excavation of the Déjeunersousl’herbe will be open to the public during the day that the ARTE television channel devotes to archaeology on June 5, a day that Inrap will relay to more than a hundred places in France. 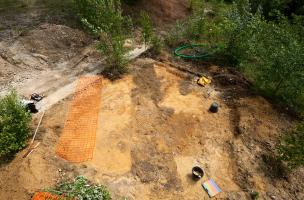 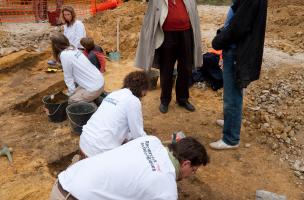 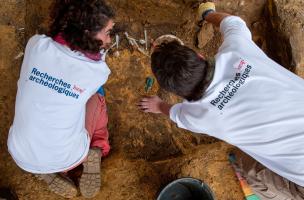 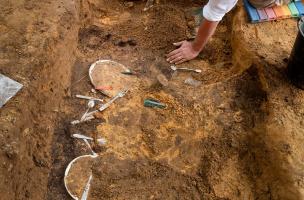 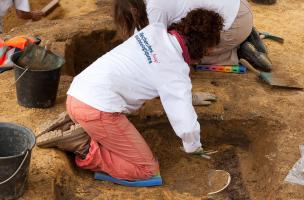 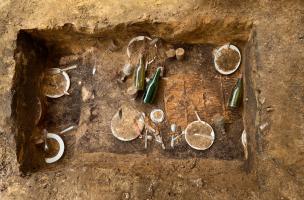 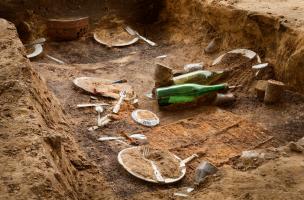