Prior to the construction of a social housing project including a square bordered by a pedestrian street, Inrap archaeologists are excavating, curated by the State (Regional Archaeological Service, DRAC Provence-Alpes-Cote-d’Azur) the parish graveyard of La Ciotat situated in the historical centre of the town, a zone archaeologically relevant for the modern epoch (1492-1789).

During medieval times La Ciotat was no more than a fishermen’s village of scarcely two hundred souls, huddled around the parish Church.

The population explosion of a fishermen’s village 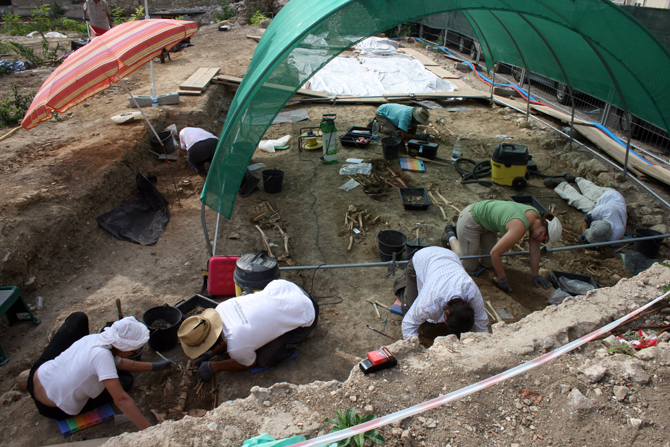 During the 16th century, an important explosion, both economic and human, was caused by the influx of numerous Italian families from Genoa. In less than a century, the population increased from 200 to 10 000 inhabitants. The town acquired a new rampart, much larger than the previous one, and the Saint-Jacques Quarter was developed around some new religious buildings. In 1581, following the medieval and Christian tradition of cohabitation of the living and the dead, a new intra-muros cemetery was created. A few years later, the Saint-Jacques Hospice, which gave its name to the quarter, was built next to the cemetery, the latter remaining in use until 1831, date of its official transfer.

More than a thousand graves

From March 2009, an Inrap team of about thirty archaeologists (anthropologists, topographers, etc.) has brought to light this cemetery, the built-up area associated with or posterior to the funeral area and traces of earlier human occupation linked to the cultivation of this sector during the Middle Ages. A section of the history of La Ciotat, of its inhabitants, has thus been revealed thanks to this archaeological operation unique in its importance†; the excavation of more than a thousand graves.
For the first time on a national level we have here the possibility of carrying out an archaeological exploration of the totality of a well conserved parish graveyard dating from modern times. In fact, apart from some cemeteries created in times of crisis, linked, for example to certain episodes of the plague, no complete cemetery has yet been excavated in Provence.
Even though in modern times historians have widely studied the phenomenon of death, archaeologists and anthropologists bring their own specific methods to this study (paleo-demography, paleo-pathology, funerary anthropology …).

One of the major interests of this excavation is the study of funerary practices in the context of normal burials. Archaeologists have studied the chronological evolution of the graves, the organisation of funerary space, and types of inhumations and their deposits … For example, they have observed a clear evolution in funerary practices. Thus, simple graves dug in the earth in which, during the 16th and 17th centuries  the deceased were buried in a shroud were followed by burials in wooden coffins, in which the deceased were often dressed.  The presence of numerous clothing items, buttons, brooches, jewels or religious objects such as rosaries, crucifixes and medals, found in situ on the deceased, give information about the customs and funeral practices of the epoch, and the strength of the religious devotion of this strongly Catholic population.

The density of the graves in urban centres of this period, corresponds to a complex equation – how to contain a maximum of individuals in a minimum space – shows here a quantity of gestures informing us on the way the living disposed of their dead.

Written archives and "archives from the earth"

The other major interest of the excavations concerns the study of those buried: the evolution and the particularities of the population, the ‘paleo-demography’, the state of health. The anthropological study allows one to establish a sort of ‘identity card’ of each skeleton, age on death, gender for the adults, illnesses, alimentary deficiencies, traumatisms, possible activities shown on the bones … The assembly of these individual histories gives a general view of the population of La Ciotat over a period of 250 years in its demographic and social dimensions.
The fact that parish registers have been kept since 1575 enables the comparison between the written archives and what may be called the "archives of the earth".  These registers show the evolution of the social status of those buried in this cemetery: first of all, the poorest, the bourgeois and the notables preferring to be buried inside the religious buildings.  In the 18th century, with the emergence of the movement for improved hygiene, burial in a cemetery became the rule. Will Archaeology confirm this rule or not and will it fix the date? 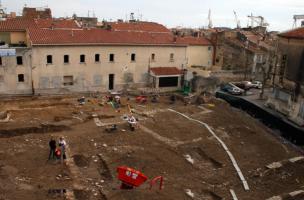 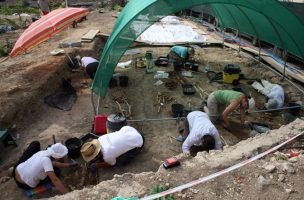 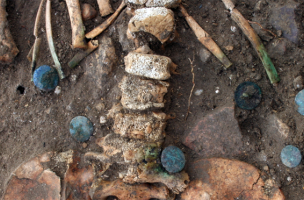 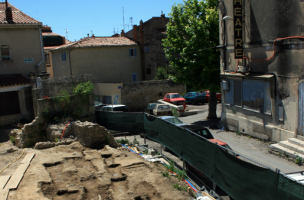 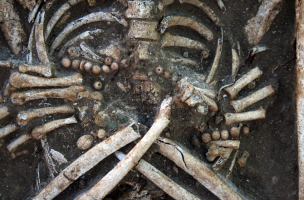 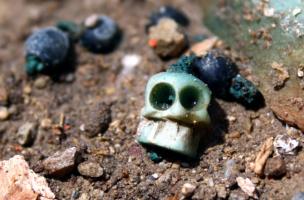 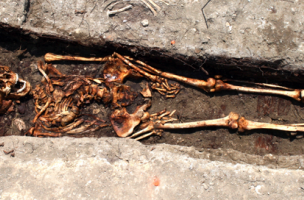