A Gallo-Roman vineyard in Gevrey-Chambertin

Gevrey-Chambertin, located 12 km from Dijon, is world famous for its Burgundy wine. Viticulture has been practiced there since the Gallo-Roman period.

This conclusion was reached following excavations by the Institut national de recherches archéologiques préventives (Inrap) in the hamlet of "Au dessus de Bergis". Conducted in collaboration with researchers of the ARTeHIS laboratory (CNRS/Ministry of culture and communication/University of Burgundy), this excavation revealed 316 rectangular pits aligned in 26 rows, which have been interpreted as the remains of a 1st century AD vineyard.

Curated by the Regional Archaeology Service (DRAC Burgundy), nearly 12,000 m2 were excavated during the summer of 2008 before the enlargement of a housing zone planned by the town of Gevrey-Chambertin. The site, which was divided into two sectors, yielded a series of cavities (pits, post holes and trenches) attributed to different periods.

For the Gallo-Roman period, a zone of over 6000 m2 was covered by more than 300 pits aligned in regularly spaced rows and surrounded by a continuous peripheral ditch.

These rectangular pits are 90 to 130 cm long and a little less than 60 cm wide. They are spaced 1 to 1.3 m apart within the same row and the rows are 2.9 to 3 m apart. The pit sections show the empty space left by the trunk and roots of a small shrub. Many of the pits are separated into two compartments by a small column of stones. 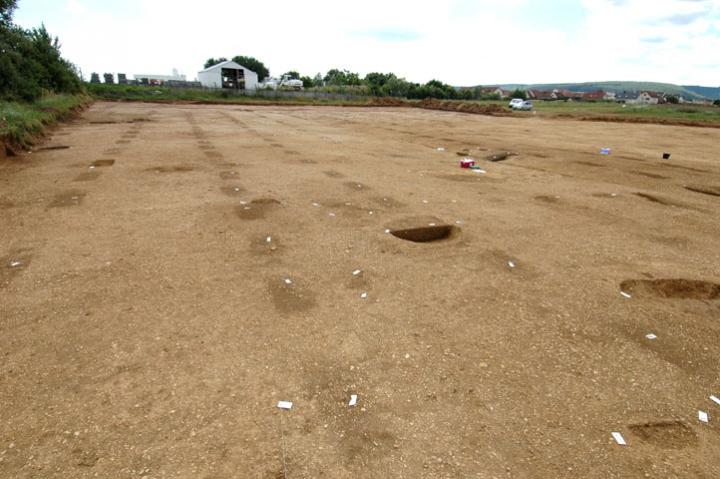 How can we interpret these remains?

The alignment and rectangular form of the pits is similar to what we find at other Roman vineyards in southern France, the Paris region and England. The small dimensions of the pits exclude the hypothesis of an orchard. The "shadow" of small shrubs observed in the earth fill is the size of the base and roots of a grapevine. The two compartments separated by a section of coarser stones correspond to the advice of Pliny the Elder and Columella, Roman authors of the 1st century AD. They recommended putting two grapevines in each pit and "curving them so that the roots of the two marcottes (layers) in the same pit would not become intertwined, which would be easy to prevent by placing a few stones weighing less than 5 pounds in the bottom of each pit, transversally and in the centre". These pits are the first example of the application of these viticultural precepts in Gaul. Some of the pits had smaller and shallower pits around their edges. These secondary pits could have served to "provine" the plants, an ancient technique used for the multiplication of grapevines in which the aboveground part of the plant (stem, branch, etc.) was buried so that it would produce its own roots before being separated from the mother plant to create a new plant.

How can we date these remains?

Grapevines planted in rows are characteristic of the Roman period (and the 20th century as well, but the land registry shows no trace of a recent vineyard). In addition, these pits are very similar to those of other Gallo-Roman vineyards as are their dimensions, their spacing within rows and the spacing between the rows are multiples of the Roman foot (29.6 cm). The excavations showed that the pits were dug into ancient soils (Neolithic to the Protohistoric period), at a date that would therefore be after the Gallic period. Pottery fragments found within the pits date from the 1st century AD.

The pits at Gevrey-Chambertin are the first traces of Gallo-Roman vineyards discovered in Burgundy. They are associated with numerous archaeological remains of the same period: villas, habitats, mausoleums, and graves in the eastern part of the district and near the site. They confirm the importance, from the Roman period, of grapevines and wine in the region. This was already indicated by numerous representations: a horn of plenty of one of the divinities of the sanctuary of springs of the Seine showing a bunch of grapes, the monument to the wine merchant of Til-Châtel, the funerary stele of a couple of owner-winegrowers of Tart-le-Haut (the man is holding a pruning tool), the god with a cask of Mâlain, etc. These objects are conserved at the archaeology museum of Dijon.
The pits at Gevrey-Chambertin also confirm that the viticulture of this period was practiced on the plain, as it is in other areas, whereas hillsides are preferred today for the production of good wine.
During the excavation, the archaeologists also revealed a low lying Middle Neolithic II habitat (between 4000 and 3500 BC), as well as the remains of a Late Neolithic habitat (3500-3000 BC). Such habitats are rare in this sector and contribute to our knowledge of the chronology of the Middle and Final Neolithic in the region. For the Bronze Age, a stable dated to the Early Bronze Age (2300 to 1650 BC), one of the southerly examples known, was excavated, as well as a farm from the end of the Bronze Age (1000 to 900 BC). A habitat attributed to the very beginning of the Second Iron Age (450-350 BC) fills a gap in the archaeological record of this period in Burgundy. 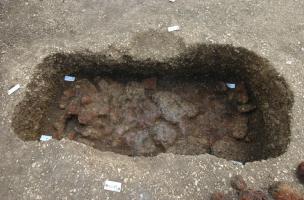 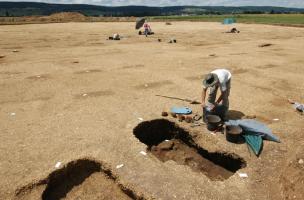 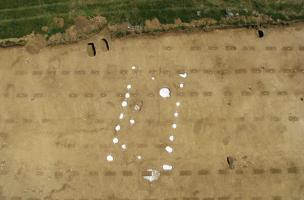 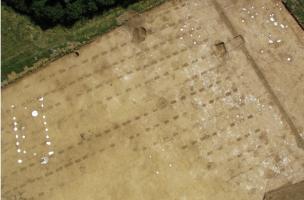 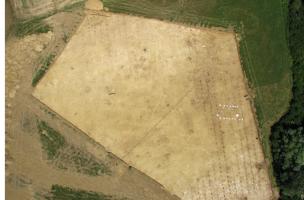 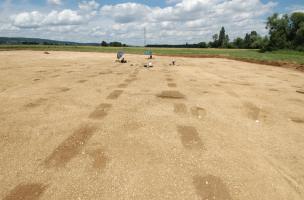 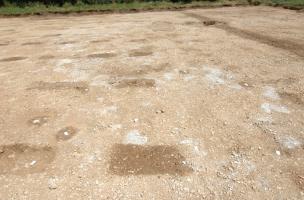