In advance of the construction of a housing project by Nexity Foncier Conseil, in Champagne-sur-Oise (Val-d’Oise), a team of Inrap archaeologists is excavating a one hectare surface, under the curation of the State (Drac Île-de-France).

At the site of "Basses Coutures”, they have uncovered an Iron Age settlement and two menhirs knocked over in a pit, probably dating to the Neolithic period.

Download the press release (May 19, 2011): Knocking down menhirs (pdf, 52 KB)
The mechanical excavation first revealed a series of silos dug into the alluviums of the Oise. Often containing rich quantities of beautifully crafted pottery, they are dated to the 5th century BC (Early La Tene). Some of the silos are up to 1.8 m in depth and had a grain or vegetable storage capacity of several cubic meters.

The site was then reoccupied at the end of the 2nd century and during the 1st century BC (Final La Tene) by a Gallic farm of the indigenous tradition. This farm was composed of two enclosures surrounded by rectangular and trapezoidal ditches, and contained buildings on posts and storage pits.

The main enclosure surrounds a surface of around 4000 m2. Its ditch, 3 m wide and 1.5 m deep, with a V-shaped profile, could have had a defensive function. The main habitation is a large rectangular building whose base is composed of 17 weight-bearing posts. This building, approximately 70 m2, probably had a second story.

The second enclosure surrounds a 2300 m2 area and a narrower and shallower ditch. A few human skull fragments were found inside. This type of deposit, resulting from the manipulation of cadavers, is common in some Gallic farms.

The two enclosures are linked by a passage. This circulation system is reinforced by a palisade and a small perpendicular ditch, allowing the animals to be channeled. Outside of the enclosure there is a series of peripheral structures, including an animal pen, a granary constructed on posts, palisades and small silos.

The Neolithic and the megaliths of Val-d’Oise

At around 5100 BC, the first Neolithic groups settled in the Paris Basin. Archaeologists have found a few tenuous remains of them at the site of "Basses Coutures”. During the construction of the A16 motorway, pits and three graves—containing a man, woman and child—dated to the Early Neolithic (5100-4700 BC), had already been excavated in Champagne-sur-Oise.

At around 4500 BC (Middle Neolithic), the megalithic phenomenon emerged. It is associated with the construction of funerary monuments reserved for a few individuals. In the Val-d’Oise, at the end of the Neolithic (3500-2000 BC), monuments known as "gallery graves” sometimes contain the remains of several hundreds of individuals, as at Guiry-en-Vexin. These "gallery graves” are the most numerous megalithic monuments (15 cases), but some researchers believe that 4000 years ago, more than 300 of them existed.

There are many fewer megaliths in the Paris Basin than in other regions, such as Brittany and Languedoc: 21 monuments are currently standing in the Val-d’Oise, and 18 others have been destroyed since the beginning of the 19th century to produce paving stones for streets. Menhirs are less frequent, with 5 known in Cergy, Menouville, Chars, Ennery and Jouy-le Moutier. These are most often located near water.

In an isolated, oval-shaped pit, two blocks of stone (orthostats) are lying down. These menhirs are the first discovered in Île-de-France in a preventive archaeology context. The first is made of an ochre-colored Stampien sandstone. It is 2 m long and 70 cm wide. It has traces of pecking and "roughening” on the visible surface, and stigmata of cutting on its edge. The second block, with similar dimensions, is made from a light gray limestone. Its top was intentionally formed, and small blocks of limestone could be the fragments of a third orthostat that was cut in place. The probable anchoring pit of a menhir is found in the center. These menhirs were clearly knocked down.

These two or three menhirs are nonetheless not the first known in Champagne-sur-Oise. An anonymous text published in 1905 in the Bulletin de la Société d’Excursions scientifiques, and entitled "Excursion Presles et l’Isle-Adam, du 17 mai 1903”, recounts the presence of an alignment of menhirs at the foot of which "Mr. Denise conducted an excavation […] (and) found only a few Neolithic pottery fragments, a few flint flakes and three tiny flint pieces”.

Were the menhirs of Champagne-sur-Oise knocked down during the Neolithic? The pottery fragments found in the main pit have a Protohistoric appearance but no clear diagnostic characteristics. They thus give no information on the period when the blocks were knocked down.

We must nevertheless remember that at Belz, near Carnac, an Inrap team recently excavated several menhirs that were knocked down and moved, or that display numerous traces of cutting. These megaliths, erected between the 5th and 6th millennia BC, were knocked down in the Late Neolithic. This is not the first such dismantling of Megaliths in the Neolithic.

The large menhirs of Locmariaquer, dated to the 5th millennium, were segmented in the 4th century and reused in dolmens, such as that of Gavrinis.

The probable destruction of the Belz menhirs during the 3rd millenium, and the knocking down of those of Champagne-sur-Oise, would confirm the evolution of mentalities during this period. 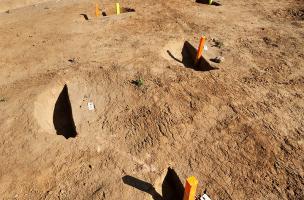 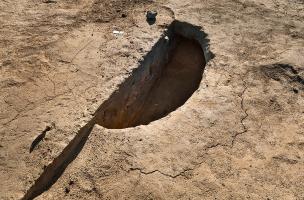 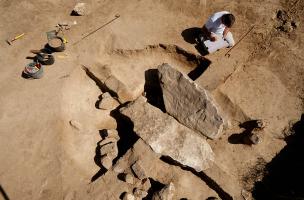 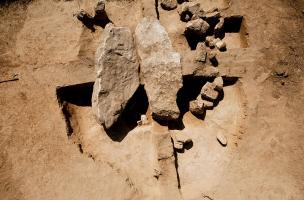 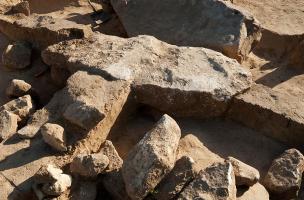 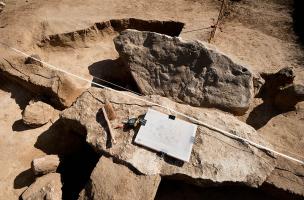 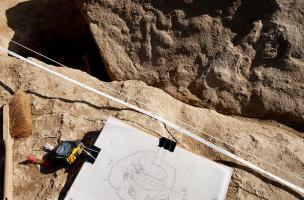 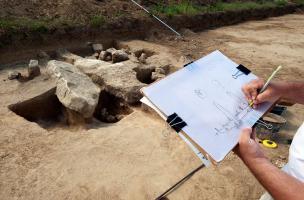 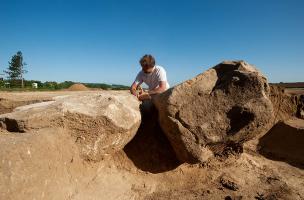 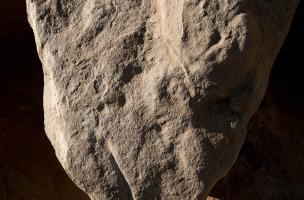 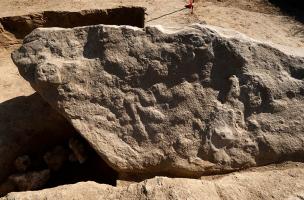 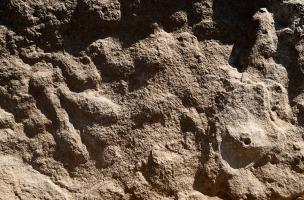 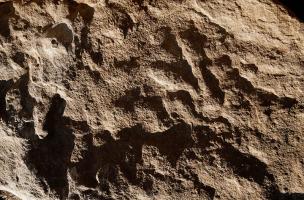 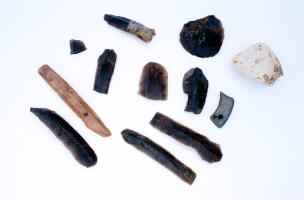 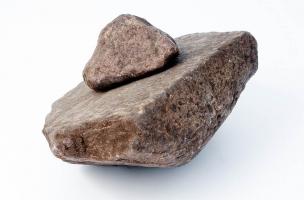