Home
>
News : Inrap news
>
A surgical operation of 7000 years ago : the oldest amputation discovered in France

A surgical operation of 7000 years ago : the oldest amputation discovered in France

The excavation of the Early Neolithic site of Buthiers-Boulancourt (Seine-et-Marne) revealed to the Inrap archaeologists the most ancient case, in France, of an amputation.This successful surgical intervention was practised, 6,900 years ago, on an elderly man. These results have just been published in the international review, Antiquity. 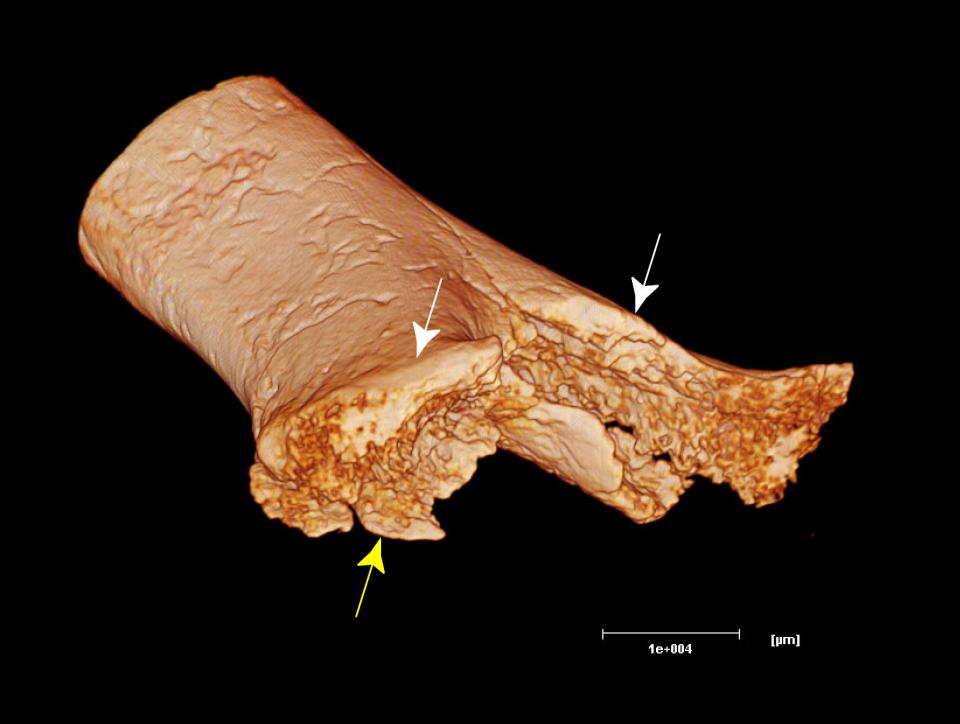 While instances of trepanation have been documented in Neolithic Europe, proof of other types of surgical intervention, notably amputation, are extremely rare. They are, in fact, difficult to identify on ancient bones often in a poor state of conservation.  The man buried was oriented east-west, head to the east, facing south. Lying on his left side, flexed, with knees brought up, his position is also typical of this period. The left upper arm is slightly away from the upper body. No trace of the left forearm was found, and nothing can explain this absence.

As soon as the bones were found, anthropologists and archaeologists expressed the hypothesis of an amputation, based on morphological observations. A study shows today that the distal end of the humerus shows a clear cut whose origin is traumatic rather than a malformation.  Radiological and mictrotomographic examination resulted in a three-dimensional reconstruction of the bone. All the images show signs of healing of the bone. The cuts are located at a place where the bone was particularly robust, and difficult to cut, especially if using flint. It would have been much easier to cut on the diaphysis.

Whatever the reason of the traumatism (accident, etc.), the forearm was partially severed by breaking the bone. The surgical intervention was practised by cutting only what was still attached. Thus, it was not an accidental amputation but a true medical choice.  This operation can be reconstituted: the surgeon proceeded from the anterior towards the posterior side and the weight of the forearm, perhaps aided by the surgeon, caused the last few millimetres of cortical bone to break away, as when cutting a piËce of wood. The arm was probably slightly raised to allow the elbow to be extended. The fact that the bone healed shows that the patient survived. The absence of infection showed that the aseptic conditions were relatively good.

Amputation was extremely rare in Prehistory and until now only two cases dating from the Early Neolithic period in western Europe have been found: Sondershausen in the east of Germany and Vedrovice, in  Moravia (Czech Republic). Buthiers-Boulancourt is thus today the oldest case of amputation in France. This discovery had benefitted from the latest techniques of archaeological and of medical imaging.

The grave is particularly wide and deep, dug mainly in the limestone substratum. Ochre had been spread under the skull. The grave goods are surprising in the Blicquy-Villeneuve-Saint-Germain culture. They consisted of a axe made of schist found near the skull and a long flint pick blade near the skull and a very large flint axe placed at right angles above the upper left arm. A very young lamb (or kid) was at the feet of the skeleton, a rare offering at the end of the Early Neolithic period. The schist blade, made of material perhaps imported from the Ardennes, is more than 20 cm long and is without doubt an object of prestige. Such an axe has not yet been brought to light in the context of a burial of this culture. The very large flint pick is about 30 cm long. It had been carefully polished at both ends and shows little signs of use.
These prestigious grave goods, the unusual dimensions of the grave suggest that the occupant benefitted from a special status within the group. He was an elderly man, suffering from osteoarthritis and toothless. Even though we cannot speculate on his social status, is seems that he was taken in charge by his group and integrated in it in spite of his disability.

We thus now know that 7000 years ago medical knowledge was much more advanced than generally imagined, and that within agro-pastoral communities social rules were complex. 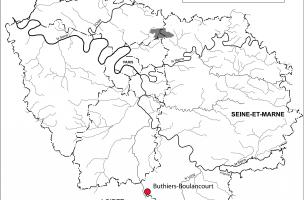 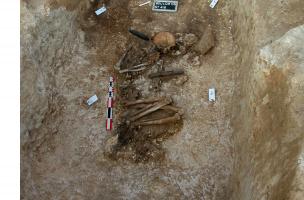 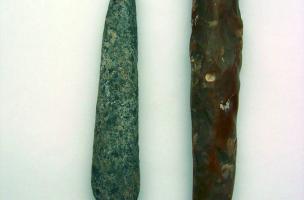 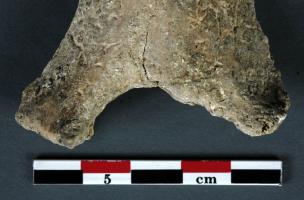 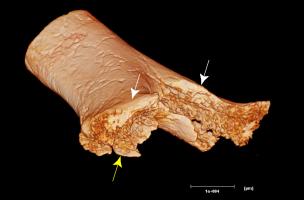 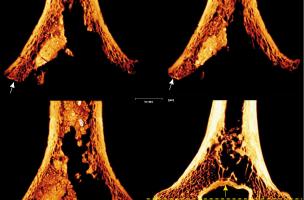